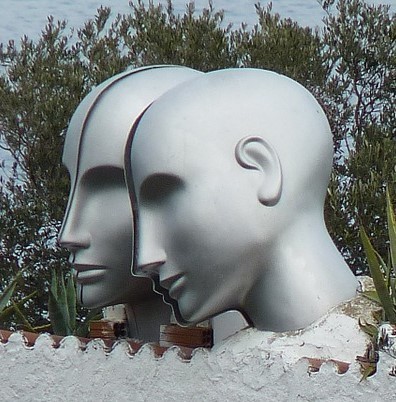 Walt Disney and Salvador Dali - artists, friends, and co-creators. I find this fascinating!

They met at a dinner party in the 40's. Dali admired Disney's animation work and called him a surrealist. They imagined a film together, where Dali would provide the art, and Disney studios would provide the animation. Of their collaboration, Dalí said that through its story he was attempting to explore a “magical portrayal of the problems of life in the labyrinth of time.” Disney’s description was so different... he said it was “just a simple story of a girl in search of real love.”

Although the work began in 1946, it had to be shelved because of financial pressures from WWII and other commitments, and all the work sat in the Disney vaults for decades. Walt's nephew Roy E Disney decided to finish the work in the early 2000's while working on "Fantasia."

This description of the film is from one of Park West Gallery's articles (links below): The film – a short six minutes and 40 seconds – is the story of Chronos, the personification of time, pursuing a mortal woman. No dialogue is spoken. Instead, only the yearning Mexican ballad, titled “Destino,” by composer Armando Dominguez accompanies this blend of Disney animation and Dali artwork.

This story of these two artists and their unfinished film holds some significance for me at the moment because I was discussing with some fellow artists the angst that we feel over unfinished works. There are a couple of them in my studio right now - paintings shelved because of other commitments or a loss of interest, or I'm caught in the "Is it worth finishing?" loop. I may revisit them someday, they may remain as they are.

Though they never saw it, I'm sure that Walt and Salvador would have enjoyed their film, it's sweet and weird and interesting, and may be different than they imagined it would be, but it is now a finished work. You can watch the full version here: Destino

Links below, in case you'd like to read more about this unusual collaboration.

Salvador Dali and Disney – a match made in art

Elaine Allen is a lifelong artist who loves to share her love for art and her expertise with anyone who would love to discover their creativity.